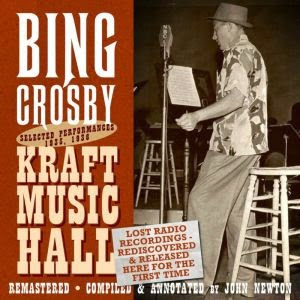 The fine British reissue label JSP Records just released a single-CD collection of rare Kraft Music Hall broadcasts from the mid 1930s, the scarcity of which is well known to serious Bing Crosby fans. I recently published the following review of it in my classic jazz website, The Vintage Bandstand, and I now reprint it here because it also belongs in this blog.

The new JSP Records release, Kraft Music Hall: Selected Performances 1935-1936, is an unexpected but wonderful surprise for all Bing Crosby fans and collectors, which I have just received from the International Club Crosby. Although the medium of radio was of paramount importance in Crosby's meteoric rise as a multimedia star in the 1930s, unfortunately not too many broadcasts from this early period of his career have survived. As the subtitle of this disc ("Lost radio recordings rediscovered and released here for the first time") suggests, this compilation attempts to fill that void by presenting material from early Kraft Music Hall programs that have not been heard since they first aired in 1935 and 1936. At that particular point in time, December of 1935, Crosby's old boss, Paul Whiteman, was still the host of KMH, and the singer was simply a guest on the program. While the show was broadcast from New York, Bing's segments were relayed from Hollywood, as we can hear on the first track of this album, which has Whiteman introducing Crosby, who was not backed by Whiteman's outfit but by the excellent, swinging Jimmy Dorsey orchestra. It appears that it was common practice for Crosby during his guest spots to sing a medley of songs associated with him or taken from one of his then-current movies, as well as a few tunes that he had introduced or helped make popular, such as "On Treasure Island," "Red Sails in the Sunset," "Dinah" (unfortunately sans the Mills Brothers here), and "After You've Gone." As John Newton observes in the liner notes, Bing sings the romantic ballad "I'm Yours," which "fits neither category, but is nevertheless a welcome addition" and would later be beautifully recorded by Dean Martin.

These performances are not interesting merely because of their rarity, but rather because they prove that Crosby was a master interpreter of popular song who was even more exciting, jazzy, and improvisatory when he was singing to a radio audience in front of a microphone and supported by a bandleader of the caliber of Jimmy Dorsey. On the December 26, 1935, broadcast, which includes a rather sleepy version of "I Get a Kick Out of You" by Kay Weber that sounds as though she were not getting any kicks out of singing the song, it becomes clear that Crosby is acquiring more protagonism, since he sings more numbers than on previous programs. In fact, come January 1936, Crosby began to host the KMH himself, quickly turning it into one of the most popular radio shows in the country, with a weekly listenership estimated at dozens of millions. From the first two shows hosted by Crosby we get some fantastic performances of songs like "Eeny-Meeny-Miney-Mo," "I'll See You in My Dreams," "A Little Bit Independent," and "Some of These Days," still backed by Dorsey, who would remain on the show until July 1937. This new release complements JSP's very recommendable 2007 four-CD set, The Vintage Years, which included broadcasts made between 1932 and 1950, featuring some interesting duets with Judy Garland and Jimmy Durante, and will delight Crosby fans for the scarcity of this type of material and also for the fact that it is up to the usual audio restoration standards of the fine British reissue label. 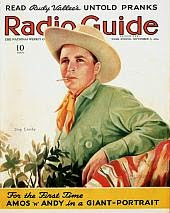 Posted by Anton and Erin Garcia-Fernandez at 12:22 PM