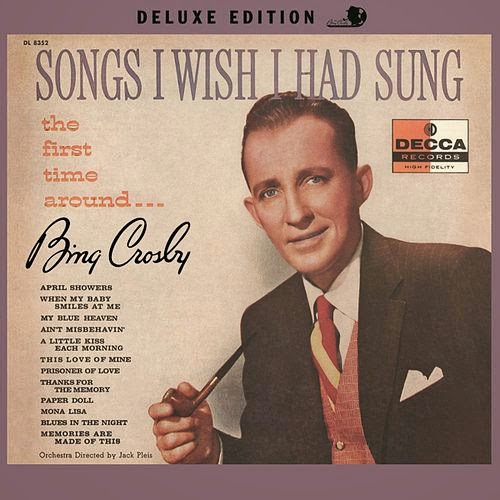 Here's a review I recently wrote for the U.S. Amazon website and that I have adapted for publication in this website. Although some fans find the arrangements on this album to be a little on the syrupy side, I must admit that I've always admired the work of Jack Pleis, both with Bing and with other singers, such as Johnny Hartman, so perhaps I am a little biased, but I've always considered this one of Bing's best albums of the 1950s.

This is one in a batch of four releases that Bing Crosby Enterprises issued back in November, the other three being the soundtrack of the PBS documentary on Crosby’s life and career, American Masters, a reissue of Some Fine Old Chestnuts with bonus tracks, and the collection of Irving Berlin tunes Bing Sings the Irving Berlin Songbook. This very welcome CD is a deluxe edition of Bing’s 1956 album Songs I Wish I Had Sung the First Time Around (which would be his last for Decca) complete with bonus tracks culled from recordings made for radio broadcasts. I won’t write an in-depth review of the first twelve songs on this CD (the actual Songs I Wish I Had Sung LP) because those tracks were already available on the Sepia Records release Through the Years Volume 9, which originally appeared back in 2012, and which I've reviewed in depth here.  As its title implies, Songs I Wish I Had Sung is a collection of songs carefully chosen by Bing that were hits for other artists and that Crosby wished he’d gotten around to recording before anyone else.

As Crosby himself states in the original liner notes that he wrote for the album (reprinted in the CD booklet), this project gave him a chance to pay tribute to other singers he admired: “Certainly I have no hope of embellishing these songs,” Bing writes, “nor do I dream of adding luster to the rich nostalgic patina which already surrounds them. Let’s just say it’s my way of paying tribute to the people who introduced and popularized them – people who . . . are particular favorites of mine.” Thus, Crosby sings twelve songs associated with the likes of Al Jolson, Ted Lewis, Louis Armstrong, the Mills Brothers, Nat King Cole, and even crooning rivals of yore such as Russ Columbo, Rudy Vallee, and Frank Sinatra. While not necessarily attempting to improve on the original versions, Crosby does succeed in making these tunes his own, and the album benefits from carefully constructed, mostly unobtrusive arrangements by the somewhat underrated Jack Pleis.

This CD reissue of Songs I Wish I Had Sung also includes ten bonus tracks taken from recordings that Bing made for different radio series between 1951 and 1960, often accompanied by a small group led by pianist Buddy Cole. All but one of these bonus tracks (“Cocktails for Two,” which already appeared on the Mosaic Records 7-CD set of Bing’s CBS Radio recordings) are previously unreleased, and they are interesting in that producer Robert S. Bader attempts to stick to Bing’s idea of featuring songs that Der Bingle might have wished he had sung the first time around. Among them are Maurice Chevalier’s “Thank Heaven for Little Girls,” Dick Haymes’s “You’ll Never Know,” and Louis Armstrong’s “A Kiss to Build a Dream On.” Crosby is joined by the Four Aces on “(The Gang That Sang) Heart of My Heart” and applies his relaxed vocal technique to classics such as “’Deed I Do,” “At Sundown,” and “Way Down Yonder in New Orleans.” From Crosby’s radio show for General Electric come “Lady of Spain” and the lesser-known “Mandy Make Up Your Mind,” the latter a tune associated with Paul Whiteman that shouldn’t be confused with Irving Berlin’s similarly titled “Mandy.” The sound is very good throughout, and Bing’s original liner notes are augmented by an essay by Crosby specialist and radio show host, Arne Fogel, making this the definitive edition of a very enjoyable Crosby concept album.

Posted by Anton and Erin Garcia-Fernandez at 5:52 PM No comments: