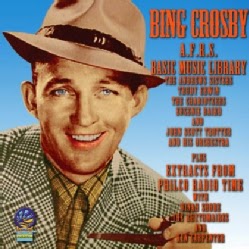 In the 1940s, the Armed Forces Radio Service (AFRS) began what was known as the Basic Music Library, a series of transcription discs containing different types of music (jazz, pop, classical, country and western, religious, &c.) to be used by the network. Some artists made special recordings for this library collection, but many of the tracks preserved on these transcription discs came from radio shows. By this time, Bing had long been established as a top radio entertainer, and so his work is well represented in the AFRS Basic Music Library, most of his contributions originally broadcast on the Kraft Music Hall show. This is precisely what this recent release from the British label Sounds of Yesteryear includes: 17 tracks from AFRS transcription discs with the October 15, 1947, edition of Bing's Philco Radio Time show thrown in for good measure.

As one would expect, the song selection includes hits of the day ("Going My Way," "Too-Ra-Loo-Ra-Loo-Ral," "San Fernando Valley," "People Will Say We're in Love") along with older tunes that Bing enjoyed to sing on the KMH show ("Always," "Put Your Arms Around Me, Honey," "Please") and duets with Eugenie Baird, Trudy Erwin, and the Andrews Sisters. It's always a treat to hear Bing's versions of other artists' hits, as in the case of "Dearly Beloved" (from a Fred Astaire movie), "It Could Happen to You" (from a then-current film starring Dorothy Lamour), and "Wait for Me, Mary" (a chart hit for Dick Haymes). The AFRS transcription discs have also preserved several medleys that give Crosby the opportunity to revive some of his earlier successes, such as the songs from his 1936 movie, Pennies from Heaven, and "An Apple for the Teacher," the latter sans Connee Boswell on this occasion. As usual, there are a couple of tunes that, in my opinion, are below Bing's talent: "Good, Good, Good," a duet with the Andrews Sisters, is an example of this. Dinah Shore guests on the Philco show, which appears here as a single 23-minute track, and she gets to sing the beautiful "I Wish I Didn't Love You So" (a song associated with both Shore and Vaughn Monroe) and even duets with Bing on "Your Flop Parade."

Overall, this is an enjoyable CD, with good sound and some very interesting material, as is usually the case with compilations culled from Crosby's radio appearances. Unfortunately, the liner notes by Michael Highton aren't very extensive, but then not all labels can be compared with Sepia, whose CDs are impeccable when it comes to packaging and notes. In any case, it looks like Sounds of Yesteryear is planning to release more collections like this one (in fact, a second volume is already available as of this writing) which will be welcome additions to the shelves of any serious Bing Crosby fan.

TRACKS: Going My Way / September Song / Dearly Beloved / It Could Happen to You / Always / Too-Ra-Loo-Ra-Loo-Ral (That's an Irish Lullaby) / Medley: One Two Button Your Shoe - So Do I - Skeleton in the Closet - Pennies from Heaven / Medley: The Funny Old Hills - You're a Sweet Little Headache - I Have Eyes to See with / Medley: An Apple for the Teacher - Still the Bluebird Sings - A Man and His Dreams / Put Your Arms Around Me Honey / Along the Navajo Trail / San Fernando Valley / Good, Good, Good (That's You, That's You) / People Will Say We're in Love / Nevada / Please / Wait for Me, Mary / Philco Radio Time Oct. 25, 1947: Where the Blue of the Night - Kokomo, Indiana - Almost Like Being in Love - I Wish I Didn't Love You So (voc. Dinah Shore) - Your Flop Parade (with Dinah Shore). 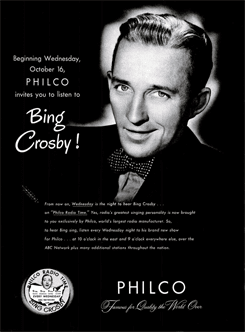 Posted by Anton and Erin Garcia-Fernandez at 2:41 PM No comments: