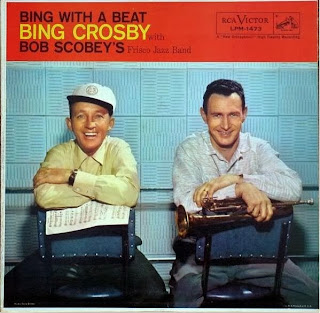 By the mid-1950s, Bing Crosby had been recording for about thirty years, including an excellent body of work for Decca that covers about two decades. He had become an iconic figure on record, on screen, and on the airwaves, and so he felt that perhaps it was time to be his own boss and no longer record exclusively for one label. Coincidentally (or maybe not), it was around this time that he cut two of his most remarkable albums: Bing Sings Whilst Bregman Swings, a 1956 collaboration with arranger Buddy Bregman, and Bing with a Beat, on which he was accompanied by Bob Scobey's Frisco Jazz Band, released by RCA in 1957. It's no secret that Bing grew up fascinated by jazz, particularly of the dixieland variety, so a pairing with trumpeter Scobey, who was one of the stalwarts of the 1950s West Coast dixieland revival, seems like a perfect idea. And the result is a great LP, with both Bing and the band running through twelve delightful charts arranged by Matty Matlock (who also plays clarinet on the session) that leave plenty of space for solos by Scobey himself on trumpet, Ralph Sutton on piano, and Dave Harris on tenor sax. The rhythm section of Nick Fatool on drums, Red Callender on bass, and Clancy Hayes on guitar shines throughout, and with such accompanists, it's no wonder that Bing sounds so relaxed and at ease. He even ad-libs asides to Scobey, particularly on "Dream a Little Dream of Me" ("Bob, you ain't just dreamin'—you is awake!") that prove that he's really enjoying himself in the company of these accomplished jazz musicians.

The album is full of highlights, but a swinging version of "I'm Gonna Sit Right Down and Write Myself a Letter" with Bing singing the verse and a fantastic piano solo from Ralph Sutton, the lovely ballad rendition of "Dream a Little Dream of Me," an uptempo reading of "Some Sunny Day" full of lyrical improvisations from Crosby, and the Louis Armstrong-styled "Mack the Knife" are among its very best moments. Most of the program is comprised of songs that, though standards, were already rather old by 1957 ("Exactly Like You," "Whispering"), and Bing also selects some lesser-known tunes that, like "Let a Smile Be Your Umbrella," "Along the Way to Waikiki," "Tell Me," and "Last Night on the Backporch," we don't get to hear very often. The 2004 CD reissue only presents the twelve songs on the original album, without any outtakes, and it also includes a wonderfully detailed essay by critic Will Friedwald, who reminds us that this edition of the Scobey group is mostly a studio band, since only Sutton and Hayes were regular members of the Scobey outfit. In any case, the band sounds really tight, and Crosby exudes such energy that he even manages to make a forgettable tune like "Papa Loves Mama" sound incredibly exciting. This definitely is a strong contender for the title of Bing's best album ever, and as such, it needs to be on the shelf of any serious Crosby fan. And, by the way, if you dig Scobey's playing here and would like to hear some more of his colorful revivalist music, you should check out two interesting compilations of his work released by Jasmine Records: Frisco Jazz 1948-1955 and Frisco Jazz '56.

TRACKS: Let a Smile Be Your Umbrella / I'm Gonna Sit Right Down and Write Myself a Letter / Along the Way to Waikiki / Exactly Like You / Dream a Little Dream of Me / Last Night on the Backporch/ Some Sunny Day / Whispering / Tell Me / Mack the Knife / Down Among the Sheltering Palms / Mama Loves Papa.


Posted by Anton and Erin Garcia-Fernandez at 4:26 PM No comments: