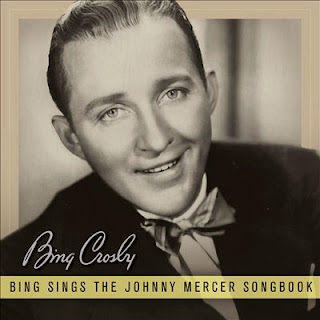 This is one of the most recent releases by Bing Crosby Enterprises, the other one being Bing's 1953 French-language LP, Le Bing, both of them, as usual, in beautiful digipack presentations and perfect sound. As its title suggests, this CD is a collection of songs written by Johnny Mercer and sung by Bing Crosby. That alone is a good idea, but if we consider that, alongside some classic studio recordings like "I'm an Old Cowhand," "Too Marvelous for Words," and "You Must Have Been a Beautiful Baby," this album also contains several previously unreleased radio performances, then the disc becomes a necessary purchase for any serious Crosby fan. The radio tracks are culled from Bing's series for Woodbury Soap, Chesterfield, the Kraft Music Hall, and General Electric and include some gems such as "I Thought about You," "Autumn Leaves," "When the World Was Young," "And the Angels Sing," "Something's Gotta Give," and two fine versions of one of my favorite Mercer songs, "P.S. I Love You," one from 1934 and the other from 1953. This songbook also features some very enjoyable duets with the Andrews Sisters ("Ac-Cent-Tchu-Ate the Positive"), Louis Armstrong ("Lazy Bones," with Jack Teagarden on trombone), and Mercer himself (their Decca recording of "Mr. Meadowlark"). The beautiful packaging with several pictures, the brief notes by Mercer collector, Howard E. Green, the wealth of unreleased material, and of course, the wonderful songs by Mercer that come alive in Bing's interpretations, make this new offering from Bing Crosby Enterprises a must for Crosby aficionados and appreciators of the Great American Songbook alike. Upon the release of the CD, I published a more in-depth review on the Amazon website, which you can read here.

TRACKS: P.S. I Love You (1934) / I'm an Old Cowhand / Too Marvelous for Words / You Must Have Been a Beautiful Baby / Day In, Day Out / I Thought about You / Mister Meadowlark (with Johnny Mercer) / Skylark / Blues in the Night / That Old Black Magic / On the Atchison, Topeka, and the Santa Fe / Ac-Cent-Tchu-Ate the Positive (with the Andrews Sisters) / Lazy Bones (with Louis Armstrong and Jack Teagarden) / Autumn Leaves / In the Cool, Cool. Cool of the Evening / Jamboree Jones / When the World Was You (Ah, the Apple Trees) / Glow Worm / Jeepers Creepers / And the Angels Sing / Something's Gotta Give / P.S. I Love You (1953)

Posted by Anton and Erin Garcia-Fernandez at 7:40 AM