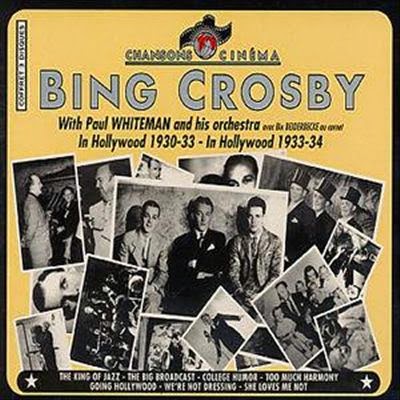 The music that Bing Crosby recorded for his movies of the 1930s has been available in different digital editions, notably the first two volumes of the Going Hollywood series released by the British label Jasmine Records. However, the first collection of Bing's film music that I ever purchased is this three-CD set from the French label Chansons Cinema, first issued in 1995 and now long out of print. It only includes the songs featured in Bing's movies from the period between 1930 and 1934—The King of Jazz (1930), The Big Broadcast (1932), College Humor (1933), Too Much Harmony (1933), Going Hollywood (1933), We're Not Dressing (1934), and She Loves Me Not (1934). Unlike the Jasmine series, which often includes music taken directly from the film soundtrack, the sides presented here seem to come from studio sessions, and the sound quality is consistently high bearing in mind the age of the recordings. Overall, this is a very attractive release, and the three discs come in jewel cases housed within a black cardboard box that hasn't fallen apart even though I bought it almost twenty years ago. Some recording information is provided on the back cover of each disc, and the biographical essay on Bing, written by Sarah Leibovitz-Dambre and presented in both English and French, is very well written and informative. 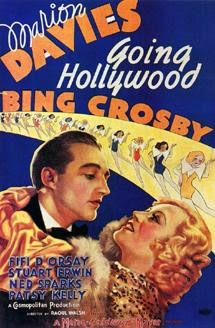 In addition to two discs' worth of Bing's movie tracks from 1930-34, there is a third CD that features a good cross-section of recordings by the Paul Whiteman Orchestra from 1928 and 1929, with Bing as vocalist and Bix Beiderbecke on cornet. These range from Rhythm Boys sides ("That's My Weakness Now," "Out O'Town Gal"), to songs on which he is part of a vocal quartet or quintet, to some solo features ("Coquette," "Reaching for Someone," "S'posin'," "A Bundle of Old Love Letters"). Although there are more comprehensive releases out there covering this period of his career, this is actually not a bad introduction to Crosby's sound with Whiteman. Strangely, on the 1928 "I'm Bringing a Red, Red Rose," Jack Fulton takes on the vocal duties and Bing doesn't seem to be featured at all! Bing's movies from this era are graced with excellent music, so some of the songs included here, such as "Please," "Learn to Croon," "Black Moonlight," "Just an Echo in the Valley," "Temptation," and "May I?" belong in any compilation of his greatest recordings from the thirties. Though not as well known, other tunes such as "Moonstruck," "After Sundown," "We'll Make Hay While the Sun Shines," "Once in a Blue Moon," and "She Reminds Me of You" qualify as overlooked gems from Bing's discography that deserve more recognition. On the whole, and although this music is available elsewhere (in fact, the two volumes from Collectables Records entitled In Hollywood 1930-34 cover almost exactly the same material as discs 2 and 3 here), this is an outstanding set that every Crosby fan should purchase—if able to find it, that is!

DISC 2 - In Hollywood 1930-33: Happy Feet / A Bench in the Park / A Bench in the Park / It Happened in Monterey / I Like to Do Things for You / Ragamuffin Romeo / So the Bluebirds and the Blackbirds Got Together / Song of the Dawn / Dinah / Please / Here Lies Love / Learn to Croon / Moonstruck / Down the Old Ox Road / Thanks / The Day You Came Along / I Guess It Had to Be That Way / Black Moonlight.

DISC 3 - In Hollywood 1933-34: Just an Echo in the Valley / Beautiful Girl / After Sundown / We'll Make Hay While the Sun Shines / Temptation / Our Big Love Scene / Love Thy Neighbor / Once in a Blue Moon / Good-Night, Lovely Little Lady / May I? / She Reminds Me of You / I'm Hummin'—I'm Whistlin'—I'm Singin' / Love in Bloom / Straight from the Shoulder.
Posted by Anton and Erin Garcia-Fernandez at 7:12 PM