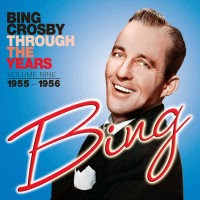 The British label Sepia Records has done an outstanding job of releasing the vast majority of Bing Crosby's 1950s catalog in chronological order as a ten-volume series entitled Through the Years, which only lacks some of his efforts from that decade, such as the albums Bing Sings Whilst Bregman Swings and Bing with a Beat! I recently published an in-depth review of the ninth volume of the series on the U.S. Amazon website. This next-to-last installment includes studio tracks cut between November 1955 and October 1956 and shows that Bing was still making some strong, enjoyable records well into his third decade as a recording artist, from Christmas songs to current movie themes to a delightful little duet with Peggy Lee. Yet the main reason why this Sepia issue is essential is that it includes Bing's 1956 concept album Songs I Wish I Had Sung (The First Time Around), in which, as the title suggests, he pays tribute to several artists that he admired by covering some of their signature hits. The track list features tunes by Al Jolson, Nat King Cole, Johnny Mercer, Gene Austin, the Mills Brothers, Russ Columbo, Fats Waller, Ted Lewis, and even a young Frank Sinatra, among others.

Bing is in fine voice here and clearly enjoying himself as he performs songs that he wished that he had been the first to introduce. The often underrated arranger Jack Pleis provides twelve well-constructed charts that generally enhance Bing's vocal delivery, except perhaps for the slightly annoying arrangement of "April Showers" that has the background choir chant "drip, drip, drip, drip," which is certainly not in keeping with the general subtlety of Pleis's work for the album. The release is up to Sepia's usual standards of quality, with excellent sound, a booklet full of photographs and session information, and very informative liner notes by Crosby expert Malcolm Macfarlane. Moreover, this is currently the only affordable way to own Songs I Wish I Had Sung... on CD, and for that reason alone, this ninth volume of the Through the Years series is highly recommendable. If you would like to read my in-depth review on the U.S. Amazon website, you may access it here.

TRACKS: Christmas Is A-Comin' / The First Snowfall / The Possibility's There (with Peggy Lee) / The Next Time It Happens / Something in Common / Look to Your Heart / Suddenly There's a Valley / Moments to Remember / Is Christmas Only a Tree? / The Longest Walk / John Barleycorn / When You're in Love / April Showers / Blues in the Night / Prisoner of Love / Memories Are Made of This / My Blue Heaven / Paper Doll / Ain't Misbehavin' / When My Baby Smiles at Me / A Little Kiss Each Morning / This Love of Mine / Mona Lisa / Thanks for the Memory / Around the World / I Heard the Bells on Christmas Day. 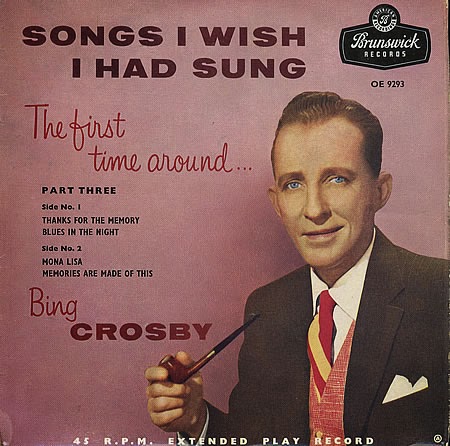 Posted by Anton and Erin Garcia-Fernandez at 4:24 PM